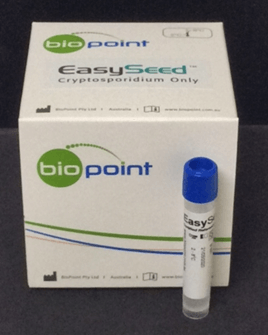 Q1) I obtained a low recovery from a sample that I spiked with EasySeed™. Could this be due to the EasySeed™ containing less Cryptosporidium or Giardia than is stated on the Certificate of Analysis?

The graph below shows the frequency of counts obtained from analysing EasySeed™. 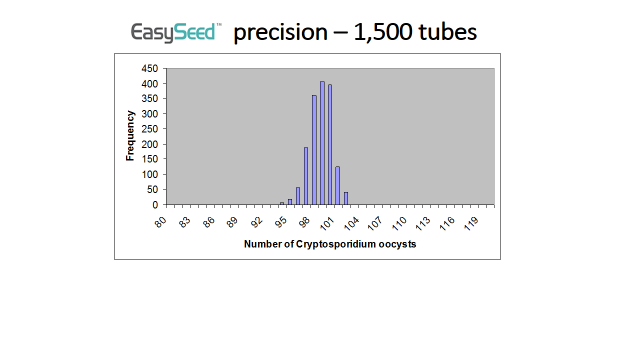 Low recoveries do occur even in the best testing laboratories in the world. There are many stages in the testing process where something can go wrong that could affect the recovery. For more information please see our Product Note: Tips on improving recoveries in Cryptosporidium and Giardia testing.

Q2) I obtained a recovery of much more than 100% from a sample that I spiked with EasySeed™. Could this be due to the EasySeed™ containing more Cryptosporidium or Giardia than is stated on the Certificate of Analysis?

The most likely cause of obtaining a recovery higher than 100% from a sample spiked with EasySeed™ is cross contamination. The sample has become contaminated with Cryptosporidium or Giardia from another source. Likely sources of contamination include:

For further information see our Product Note: Tips for reducing the risk of cross contamination in C&G testing.

Q3) The morphology or the DAPI fluorescence of the Cryptosporidium and Giardia in samples that have been seeded with EasySeed™ are not as good as the positive control in the EasyStain™ kit. Why is this?

Q4) Can EasySeed™ be used as source of DNA for PCR assays?

The dose of gamma radiation that is used to inactivate the cysts and oocysts in EasySeed™ is small and is unlikely to damage the DNA sufficiently to interfere with PCR analysis.The effect if any would also depend on the target of interest. The radiation is unlikely to affect results for a multicopy target. But If the PCR is detecting a single copy target or a labile target such as rRNA or mRNA then it is probably likely that EasySeed™ may behave differently to fresh cysts and oocysts. We have no data on how stable the DNA is within the oocysts and cysts once they have been irradiated.

We do not have enough information or experience with the actual use of these products in PCR assays to provide more detailed information.